Writer as Artist as Writer...

June 06, 2018
I make lists.
That's not unusual is it? Lots of people I know make lists.
Lists make me feel as if I've achieved something, and when they're lists for an event that I'm looking forward to, it creates an air of anticipation around the whole thing.
But.
My lists are a teeny bit different to most people's...
Because, ahem....

I paint my lists.

I don't mean that I paint over them. I mean I actually paint pictures of the items on my list.
Not every list. I mean, I don't paint my weekly shop. That would be mad! (As if you don't think I'm a just a bit potty already.)
No, I mean my Packing Lists. For things like weekends away, holidays, and for the much-anticipated writer's Conference held by the Romantic Novelist's Association, this year in Leeds.

I'll find you some of the painted lists in my sketchbooks. Hang on a minute while I dig some of the better ones out... 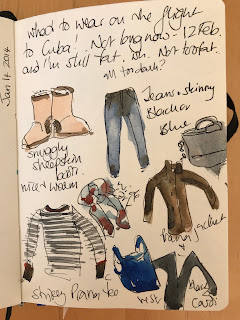 Here's one. It was a big mistake, by the way, to wear skinny jeans to Cuba. It was fine on the flight, but I nearly melted at the airport.
At least I looked reasonably co-ordinated while I fainted. (I didn't, actually, but another lady did. I knew how she felt. There was no air-conditioning at the airport, and we were packed together like cattle.
I should have worn the one below. 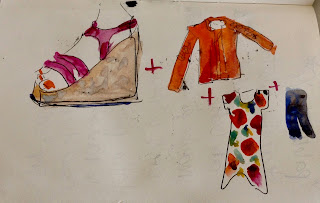 Much more suitable.
I've still got those pink wedges, although I don't think I've EVER painted my toenails orange. Wouldn't I look as if I had a really worrying nicotine habit? 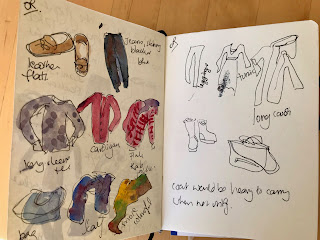 Aaand left, is more of my actual holiday packing list.
You get my drift, anyway. I'm not going to embarrass myself with any more pictures.
And I'm not going to add that I use packing cubes...
*psst, they're brilliant, btw.

The reason that I particularly wanted to tell you about this slightly weird habit, is that I'm a visual person. When I write, I see the characters, the action - and I write it. Like a screen-play, unfurling before me.

So, I began to draw my characters.
If you've read, Summer at the Art Cafe, you'll know who this is: 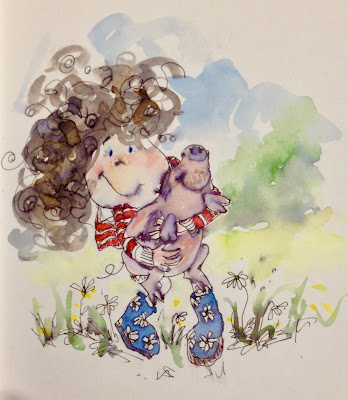 And if you haven't, then you really should!
I'm doing some give-aways soon - bearing this image, and also, the front cover, which I also painted!
Keep an eye out :) 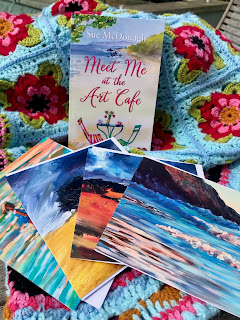 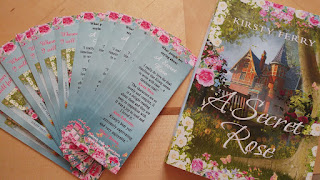 Sue: Hi Kirsty! You are very young, but you have quite a string of published novels behind you. When did you start writing?
Kirsty: I’ve been writing since I was a child, but had to have a break when my son was born, and I found I had no time to do anything.
When he was about seven I got made redundant and did an OU writing course which I enjoyed, then went on to complete my degree with them alongside starting a new job. Two of my modules were Creative Writing, so I had fun with those, and actually all of the stories I wrote for the course have all ended up published in some shape or form, so I guess I’ve been writing ‘seriously’ for about thirteen years now.
Some Veil Did Fallwas based on a short story I did for the first course, and I decided it had some mileage to grow, …
Read more 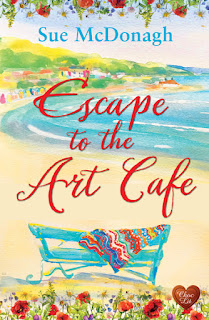 Recently I asked the lovely Likers on my Facebook Author page what they would like to know about how I write. This generated quite a lot of questions, and prompted this post.
Each question merits its own blog post really, but I've tried to answer as fully as possible in a reader friendly format.

Q: Do you you use writing software, e.g. Scrivener or similar? Are you a plotter or a pantser, or somewhere in between? I use plain ol' Word, on a Mac. But I also write in longhand, particularly in the early stages, and I'm a sucker for gorgeous stationary!
Longhand allows me to write in a stream of conscious, unedited way, and this is where I find out about my characters and what they want and why.

Plotting v Pantsing?  I'm a bit of each! I spend a really long time developing my characters, where they live, their pets, their cars, their Pinterest Boards, their friends, that sort of thing, and then I write a sort of map of how the story will progress, where the main pinch points…
Read more